This project will focus on past present and future (if any) of one of the biggest factories in Moldavia, Nicolina Factory.

Constructed with Ciurea bricks in the early 1900, a series of building in Nicolina are true works of art presenting the industrial architecture trend and reminding about the specific Nordic buildings, sober and noble. More over, for the way in which they look, some of them are more beautiful than countless constructions erected after 1989 in the county. 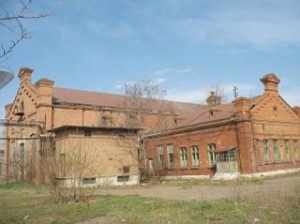 What the communists and the two world conflagrations had not succeeded has been done by the political class of Iasi, through liberal ideas which have turned a traditional, still viable factory, into a ground pretty proper for real estate speculations.

The compressor station (the old electrical plant) and the old water castle of Nicolina are proposed for classification in the list of monuments as XX century representative industrial architecture objectives, in what it is concerned the technological dedicated constructions in Iasi.

an entire tradition of more that 100 years has been be destroyed at Iasi.