Pathways I.D., the UK partner, decided that for a final event in Sarn it would move outside – have a celebration of pub games as a community party.

The event occurred during one of Mid Wales’ very rare heat-waves & provided both a social gathering for local people & raised money for the local Air Ambulance (‘helicopter’) & the local parish church.

Being mid July, the evening was long. gentle and ideal in which to simply sit and and talk to neighbours and friends. 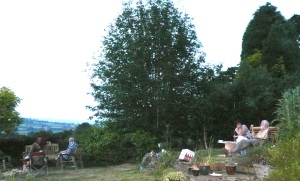 There are a few easily identifiable ‘traditional’ pub games & some remain very popular (for example ‘darts’& ‘dominoes’) whilst others used during the project – ‘shove-halfpenny’, ‘bagatelle’ are less common. 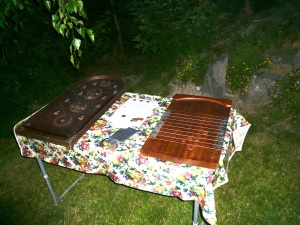 However many people who participated in the evenings brought their own games.

‘Sorry’ a board game (pictured on the ‘Games at The Anchor’ page) was puzzlingly popular as was Jenga, a game created by a British family in Ghana and only officially launched in 1983.

Here we see one of the collapsed towers – and the moment providing a chance for a participant to attack a beef-burger:

The most popular game of the evening was ‘The Horse Race’. It allowed a variety of participation – individuals ‘bought’ horses for the race, whilst others ‘laid bets’ on the race itself. 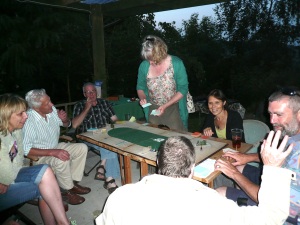 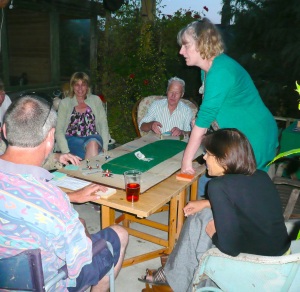 The game proved so popular, especially with an ex-landlord of the Sarn Inn, that he is likely to create a larger version and use it in future pub games evenings.

The games activities also produced a variety of comments from participants – including one from Des Cound of Sarn regarding the outdoor quoits pitch that existed in Sarn.

This pitch was one of the few remaining of the Quoits game known as ‘The Long Game’, played only in Scotland and Wales & using heavy metal rings thrown at (hopefully ‘over’) a post surrounded by thick mud.

The game was (unsuccessfully) outlawed under English law in 1388!

Des is possessor of one of the quoits used. Further research is being carried out – and maybe a revival!