The settlement of Sarn is one of the places in which the project is being developed. It is in Mid Wales close the the border with England.

A view from the east.

The village called Sarn is an invention of the C19th. The name means ‘paved causeway’ and presumably was a point at which tracks (now roads) crossed an area of wet ground. The word seems to have first been attached to a Public House (‘pub’) which served travellers on the ‘paved causeways’. The pub remains one of the most significant buildings in a place which has very little else!

There is now a small centre composed of houses, churches and a private school but most of the population live scattered along part of the valley known in the Welsh language  as Dyffryn Ceri.

A view from the hills above the valley looking north

Sarn is place through which people pass, there being very little to detain visitors. Thus in recent times, one of the most significant events, caused by a passing motorist, was the accidental destruction of the telephone kiosk. In February 2010 a car,with driver unsure as to how to reach Coleg Powys in Newtown & receiving ‘sat-nav’ directions to turn left in Sarn (where there is the College farm) skidded on ice and found themselves embedded in the kiosk. 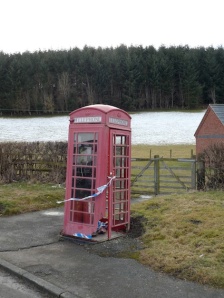 This kiosk was the setting for the infamous ‘Armed Siege of Sarn’ in which a young man, apparently slighted in love,  chose to make a ‘last stand’. The local reports of the incident suggest that he became surrounded by a police Armed Response Unit – and eventually shot himself in the shoulder (it being impossible, inside the cramped kiosk, to point the gun away from his body).